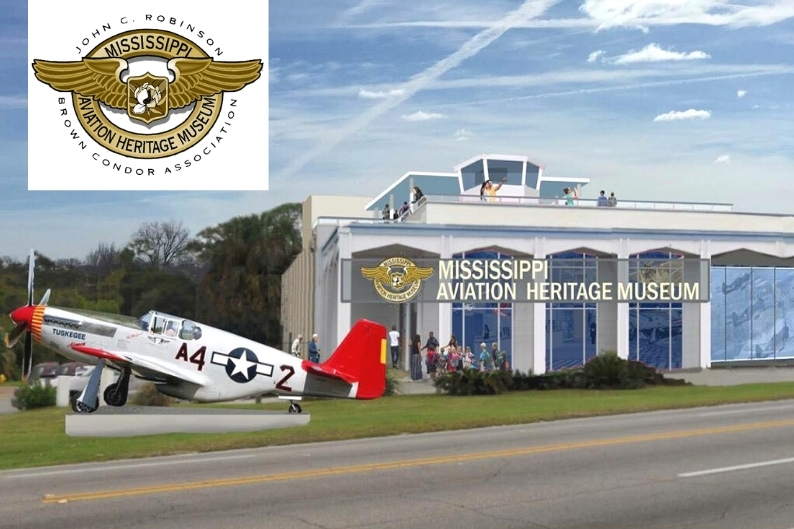 The Mississippi Aviation Heritage Museum is located adjacent to the Biloxi-Gulfport International Airport. It's a haven for the aviation enthusiasts in your family, but everyone will be surprised at the amount of history and detail to be found in this little museum. There are several aircraft on display, hands-on interactive exhibits, and lots of information about the museum's star, Colonel John C. Robinson, an early founder of the Tuskegee Airmen.

On-site at the Museum, you'll find exhibits and history lessons that are fantastic and interesting for all ages. You can test your flying skills on the simulator or sit right in the hot seat and take the controls of your warbird. It’s an excellent stop for anyone staying at one of the lovely beach hotels near the Mississippi Aviation Heritage Museum.

Finding the museum is easy thanks to the distinct "Red Tail'' P-51 Mustang sitting out front. The Red Tails were the nickname given to the Tuskegee Airmen, a now-famous group of African-American pilots trained in Tuskegee, Alabama, during World War II.

Inside the museum's sizable 52,000-square-foot facility, you'll find aircraft of all shapes and sizes. There's a life-sized Apollo space capsule, along with a mock-up of the Space Shuttle's cockpit. Memorabilia, collectibles, history, and artifacts line the walls.

The museum is dedicated to John C. Robinson; a black aviator commonly referred to as the father of the Tuskegee Airmen. Robinson spent his early years right here in Gulfport, where, as the story goes, he was fascinated and inspired by a seaplane in 1910.

Opportunities for black men to become pilots were non-existent in the Jim Crow South. Robinson moved to Chicago and applied to flight school but was denied there as well. He became a janitor, which allowed him to eavesdrop on ground school lessons.

In 1935, Robinson volunteered to defend Ethiopia in its conflict with axis-allied Italy during World War II. He volunteered for many reasons, one of which was that black aviators were not yet welcomed into the US Army Air Corps.

Robinson earned a reputation for himself serving in Ethiopia, earning worldwide press attention and recognition. He was dubbed the "Brown Condor." His success was a significant catalyst to push the US Army Air Corps to accept black pilots, which led to the creation of the Tuskegee Airmen.

Robinson established a pilot training school in his later life and was instrumental in Ethiopian Airlines' formation.

The museum features other local tie-ins as well. Memorabilia and stories from NASA astronauts with Mississippi connections are collected here. There's also information on Keesler Air Force Base, which still operates today nearby in Biloxi.

There are several airplanes on display at the museum, plus cockpits and flight simulators you can sit in. There are model aircraft to fly and a World War II-era Jeep. Airplanes range from donated personal aircraft to retired military models. Several airframe components demonstrate how aircraft are constructed from the inside out.

The museum is dedicated to preserving the story of Gulf Coast aviators and astronauts. It's an educational, fun experience that is well worth visiting during your stay at the beach hotels near the Mississippi Aviation Heritage Museum.

Finish your tour of fascinating transportation history at the Mississippi Coast Model Railroad Museum. It's just across Pass Road, only steps away from the Aviation Heritage Museum.