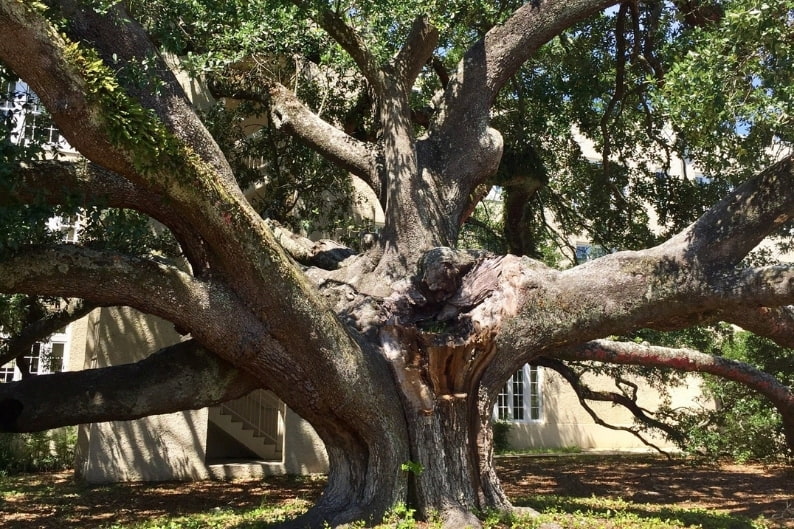 When Columbus sailed the ocean blue in 1492, the Friendship Oak was already a few years old. This tree has undoubtedly seen a lot of beautiful beach days and weathered some storms too. But the lure of this southern live oak is much more than just seeing a big tree with some history. It's an idyllic look into life on the Gulf Coast, from the view of something that's seen its share of it.

The Friendship Oak is located on the beautiful Gulf Coast campus of the University of Southern Mississippi.

It's a centerpiece of the campus, right on their front lawn with a beach and Mississippi Sound view.

The campus is located right on Beach Boulevard (Highway US 90), about 3.3 west of Gulfport Harbor. As you enter campus from the highway, take the first left and head to the small traffic circle. You'll see a marker plaque for the tree right in front of Hardy Hall.

Most of the hotels near Friendship Oak lie along Highway 90, so stopping by only takes a few minutes. It's the perfect stop on your way into town, or even if you're looking for a shady place to have a quick cup of coffee.‍

THE LEGEND OF THE FRIENDSHIP OAK‍

According to campus lore, those who enter the shade of its branches will remain friends for all their lives.

We cannot say whether it's the tree itself or the fantastic location that fosters such camaraderie. But this tree has shaded everyone from Native Americans to pirates, explorers to homesteaders, and college students to seaside vacationers.‍

The best estimates put the tree's "birthday" somewhere in 1487. That's five years before Columbus's voyage to the New World and 289 years before signing the Declaration of Independence.

The oak stands about 59 feet tall, and its trunk has a circumference of 19.8 feet around. Its numerous downward sweeping limbs are most notable, giving it a sprawling appearance covering much ground. In 2011, it was estimated that the tree's crown covered 16,000 square feet.

The Friendship Oak is of the live oak species Quercus virginiana. After major hurricanes in the area, like Camille (1969) and Katrina (2005), acorns from the Friendship Oak are collected and used to seed live oaks to replace those lost in the storm.‍

CAMPUS LIFE UNDER THE TREE‍

The Friendship Oak has been a part of campus life here since before there was even a campus. The school was formerly the Gulf Park College for Women, founded in 1921.

In the 1920s, Vachel Lindsay, a poet, and professor at the college, read poetry to students under the tree's limbs. In the 1950s, the oak was featured in an issue of Life magazine about the school. The article noted that some classes were held under the tree during good weather.‍

MAKE NEW FRIENDS FOR LIFE ON THE MISSISSIPPI GULF COAST‍

When coming to or from your hotel near Friendship Oak, carve out a little time to stop by. You never know who you'll meet or what stories the tree will share with you.

Once you've relaxed for a spell under the Friendship Oak, head over to Gulfport's Fishbone Alley. There you'll find a collection of bars and restaurants that back up onto a small alley full of a funky, eclectic collection of artwork from local artists.